What Are Amulets in iM@S2? Edit

New in iM@S2 is a clothing slot for equipping an amulet (a.k.a. omamori). In the physical world, omamori are good-luck charms that you might purchase at a Japanese temple to bring you love, good grades, or similar wishes. In iM@S2, amulets modify the gameplay rules for all performance activities, or in other words for auditions, live concerts, and festivals.

You can choose one amulet for your idol unit to hold at any one time. The amulet you choose does not impact the way your idols look on stage so you are free to choose whichever one will help you most without worrying about appearance. It is worth having some amulet or other equipped at all times once you collect a few of them. In fact, in order to reach the highest ranks in the game (in the long run), it will be necessary to learn to use amulets effectively.

About the Amulet Characters Edit

iM@S2 amulets are sold in the form of "Namchara", or Namco Character Mascots. Far from being Namco character cameos from other games this time (no Taiko here!), the Namchara have silly or amusing wordplay names accompanied by a goofy picture. There is one Namchara representing each of the 47 prefectures of Japan, plus one boss, for a total of 48 members of the Namchara Cheer Group. They exist as a fun way to name the amulets. Additional Namchara background information (unrelated to gameplay) is on Namco's Namchara page and pictures are on page 27 of the iM@S2 X360 instruction manual.

To get a new amulet, you must individually earn the right to buy it by winning a specific audition, live concert, or festival. You cannot buy amulets at the regular in-game stores (Lucky Rabbit or BK Maniac). Here's how it will work.

When you win an audition, live concert, or festival that you haven't bought the amulet for yet, your idols will go off shopping by themselves. While waiting for them, the producer will wander into a amulet seller's shop. The seller will describe the name of the single Namchara she is selling, its cost, and what the effects of the amulet are. The amulet on offer depends entirely on what geographic area (prefecture) your performance was held in, which is why the areas are listed in the effects table below. The seller will then ask if you want to hear her repeat the description. You can choose:

You can have her repeat the description as many or as few times as you want while you decide whether to buy the amulet. Once you tell the seller she needn't repeat the description, she will next ask whether you will spend the money to buy the amulet. You only get one chance to answer (there is no "are you sure?"), so be sure to pick the option you want the first time:

If you choose to skip the amulet this time around to save money, that's OK. The same amulet will still be available and offered again if you do a performance in that prefecture again. This is true regardless of whether the repeat is in this playthrough or a later playthrough. Like clothes and money, amulets carry over between playthroughs so you can eventually collect them all if you want.

For folks who may not read Japanese well, there are two easy options to tell what amulet you're going to get before you buy. This can help if you're in a money crunch and aren't sure whether you want to spend the coin or save it for something else. The two ways are 1) by name, and 2) by prefecture.

First option is by name. In this case, you have to pick a performance-type event and win it first, then pay attention to the amulet seller's sales pitch (don't A-button skip it). You need two pieces of information: the price, which will be an obvious number, and the amulet name, which will be separated in quote brackets, 「like so」. You can pause the game so that the name stays on screen. Look in the table below for the sales price first, then out of each amulet that carries that price, look for the Japanese characters that match the name displayed on screen. That is the amulet being offered.

Second option is by prefecture. In this case, you do this on the Schedule Select screen before actually choosing your performance-type activity. The prefectures are the small areas on the in-game map, contained within the six large regions you can tab between. On the Schedule Select screen, highlight the performance you want and see which red map pin is raised up. Compare that to a map of Japan to find the English name of the prefecture, and look up the result in the table below. That will uniquely identify the amulet you will be offered when you win that particular event.

Table of Amulets and Their Effects Edit

Meet the Namchara! This table is arranged in the order that the amulets show up in the iDOLM@STER2 clothing inventory menu, left to right and row by row. As there are four amulets per row, the first four amulets in the table comprise the first row in the menu, and so on. As it so happens, that order is also geographic by prefecture, from northern Japan to southern, which can help you find where to fill in the holes in your amulet collection.

The Japanese name of each amulet is provided so that you can match what you read here with the characters you see in-game to double-check that you are equipping the amulet you want (easy whether or not you know how to read the characters).

Some of the more powerful amulets are highlighted in blue. It might be worth your while to seek them out specifically early on in your producer career. The blue ones are not the only useful amulets though; feel free to browse the entire list and pick one that best matches your situation in the game.

Terminology note: "general appeals" is a catch-all phrase that refers to Dance, Visual, and Vocal appeals.

This map of the Japanese prefectures can help you find specific amulets you may be looking for. 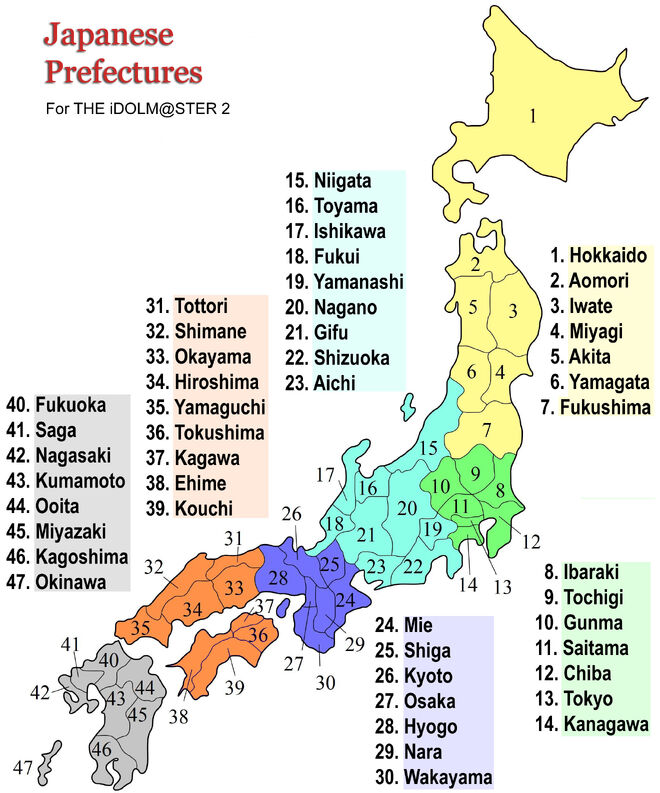 There is one hidden amulet in the game, the 50,000円 Mushaharu's Secret Crest. To earn the ability to buy it, you must accumulate 100,000 fans (10万) in the Capitol Region (首都), thereby unlocking that area's Utahime-Utaouji Festival (歌姫・歌王子フェス). Win that festival and you will be offered the amulet. Don't forget to save enough money to afford it! Mushaharu is considered the leader of all the Namchara, according to the game.

Note that getting this amulet is the only reason to ever get 100K fans in the Capitol Region -- the Idol Academy Area Awards only exist for the five regions of Japan that are not the Capitol. Once you get the amulet, you needn't worry about fan count in this area on subsequent playthroughs.

Terminology note: "general appeals" is a catch-all phrase that refers to Dance, Visual, and/or Vocal appeals.

Retrieved from "https://imas.fandom.com/wiki/Amulet_Purchasing_and_Effects_Guide?oldid=4682"
Community content is available under CC-BY-SA unless otherwise noted.